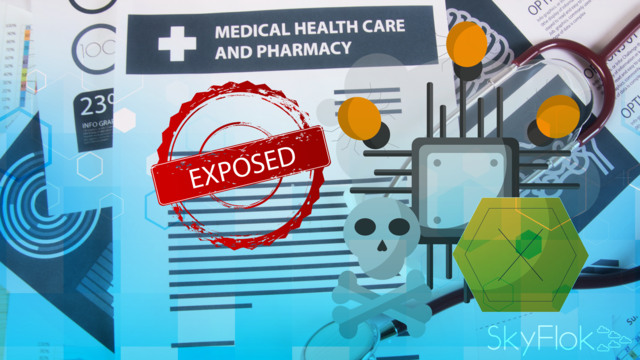 At SkyFlok we allow users to use multiple cloud storage providers together to efficiently and securely store their files. We distribute the data across multiple locations and providers, which means that an attacker needs to compromise multiple Cloud providers before having any chance to look at the files. Your clients’ data is safe and you keep full control over it.

The company said it discovered the breach in December 2017. It notified those affected and migrated them to its eScription transcription platforms. Nuance also notified law enforcement, who identified the third party and recovered the records.

Information that was accessed included name, date of birth, medical record number, patient number, and information dictated by the provider such as patient condition, assessment, diagnosis, treatment, care plan, and date of service.

The federal investigation determined that a former Nuance employee had hacked into the company’s servers and accessed the patient information. The DoJ found that the information was not used or sold for any purpose and that all the data had been recovered.

CPRF Says PHI on 8,300 Patients Was Exposed for 10 Months

The Cerebral Palsy Research Foundation of Kansas (CPRF) said May 9 that it discovered on March 10 that a patient database was exposed for ten months.

CPRF reported to OCR that 8,300 patients were affected by the breach.

After an investigation, the foundation determined that a demographic database containing client information from 2001 to 2010 was not identified during a recent change in servers at CPRF, which temporarily exposed the information before it was secured.

CPRF said it is offering free credit monitoring services for one year to those affected by the breach.

Ohio-based USACS Management Group announced May 8 that an unauthorized party may have accessed an employee’s email account on March 9. The healthcare management consultant informed OCR that 15,552 individuals were affected by the breach.

Information that may have been compromised included patients’ names, addresses, dates of service, USACS account numbers, medical and health insurance information, diagnostic and treatment information, and, in some cases, Social Security numbers.

USACS said it is offering free credit monitoring and identity protection services for one year to those affected by the breach.

PHI that may have been compromised included names, dates of birth, and diagnosis information. The company said Social Security numbers, financial transaction, and payment information were not involved in the breach.

ECSC said that, because of the breach, it had deployed an enhanced multicamera security system inside and outside the building and encryption on most portable electronic devices and desktop computers used for patient care.

The center did not indicate that it is offering free credit monitoring services to affected patients.

Arkansas Health Group (AHG), an affiliate of Baptist Health, reported May 11 that one of its physicians stored PHI on a cloud-based file-sharing website.

The information that was exposed on the website included patient names, dates of birth, medical record numbers, visit dates, visit type, and diagnoses.

Baptist Health reported to OCR that 3,453 individuals were affected by the breach.

AHG said that it discovered the breach on March 23. It said that the website was password protected and used encryption, but the security did not meet its “more stringent security requirements.” AHG stressed that Social Security numbers, addresses, and insurance information were not disclosed.

The group said that it had no evidence that the PHI was viewed or misused by an unauthorized party. It did not say whether it was offering free credit monitoring services to those affected by the breach.