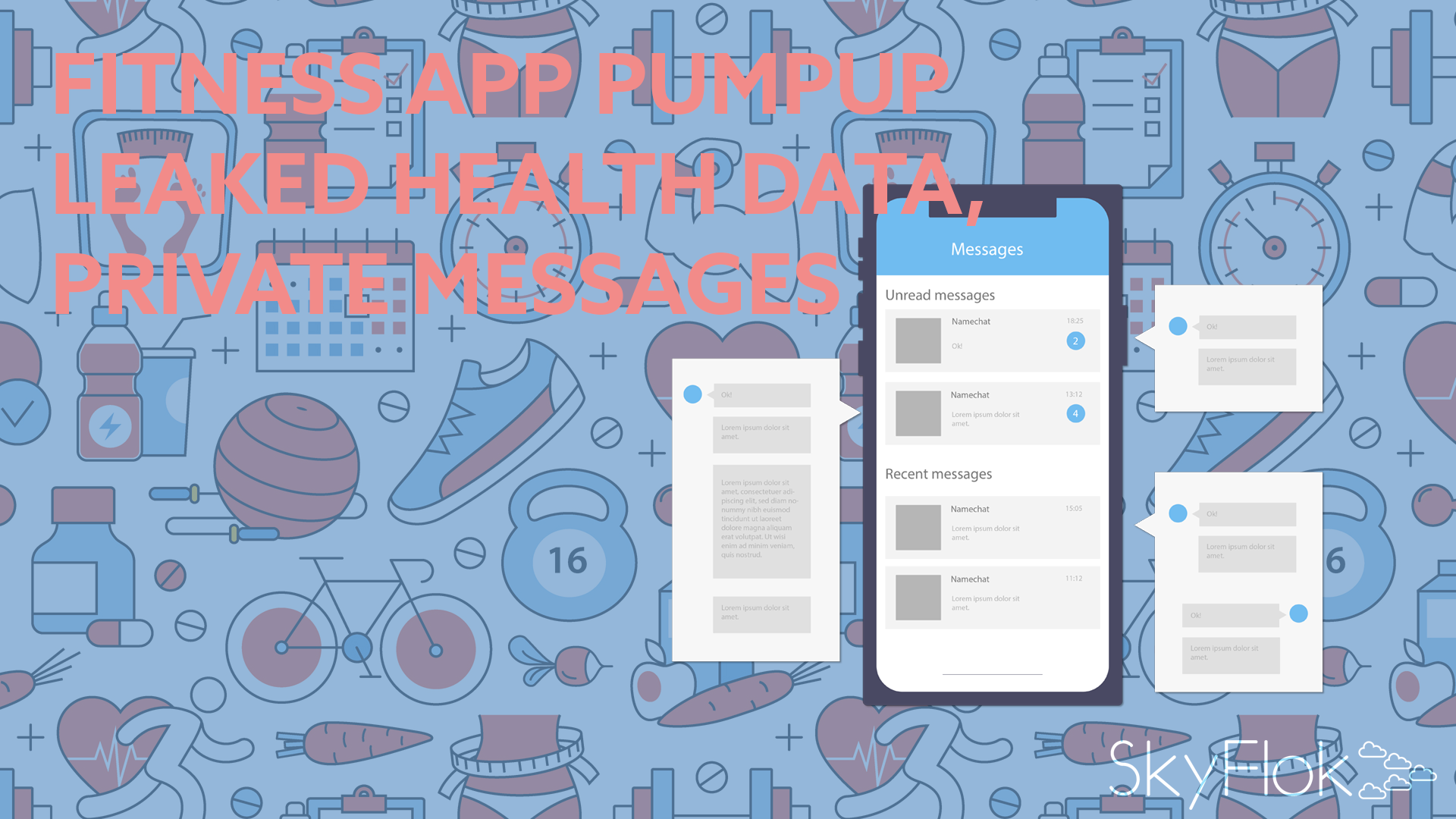 The popular fitness app PumpUp that claims over six million users was leaking private and sensitive data, including health information and private messages sent between users. The exposed data included email addresses, dates of birth, gender, and the city or town of the user’s location and timezone. The data also included the user’s app bio, workout and activity goals, and users’ full resolution profile photos, who a user has blocked, and if the user has rated the app.

Looking for a place to store and share files securely? Consider SkyFlok for secure cloud storage and private two-way sharing with your customers. In case of an attack on your files, SkyFlok has a backup plan for you. You can recover in no time as SkyFlok keeps all previous versions of your files in the system and easily accessible to you.

A popular fitness app that claims over six million users was leaking private and sensitive data, including health information and private messages sent between users.

PumpUp, an Ontario-based company, bills itself as a fitness community, allowing subscribers to discover new workouts and record their results, and get advice from fitness coaches and other users.

But the company left a core backend server, hosted on Amazon’s cloud, exposed without a password, allowing anyone to see who was signing on and who was sending messages — and their contents — in real-time.

The server, now secured, acts as a messaging broker, directing user requests and private messages to other app users. The broker uses the little-known MQTT protocol, which developers often use for communicating with Internet of Things devices and phone apps, thanks to its low bandwidth, which cuts down on server costs and data overheads. The protocol is transitory, so anyone can see the real-time stream of data, rather than accessing a vast centralized data store.

Each time a user sent a message to another user, the app exposed user profile data — and the private contents of that message.

The exposed data included email addresses, dates of birth, gender, and the city or town of the user’s location and timezone. The data also included the user’s app bio, workout and activity goals, and users’ full resolution profile photos, who a user has blocked, and if the user has rated the app.

Also included in the exposed data was device data, such as iOS and Android advertiser identifiers, users’ IP addresses, and session tokens for the app which could be used to gain access to a user’s account without needing their password.

It’s not known for how long the server was exposed, but the company was slow to pull the server offline.

We spent over a week trying to inform the company of the breach. ZDNet contacted the company’s chief executive Garrett Gottlieb, several of his staff, and even the company’s customer support inbox — but our emails were not returned. The company’s backers, General Catalyst — which invested $2.4 million into the app — also did not respond to our inquiries.

The server is thought to have been quietly secured earlier this week. We contacted Gottlieb again prior to publication but did not receive a response.

It’s not known if the company, which also has an office in San Francisco, will disclose the data breach to regulators in California, which the law mandates. Canada’s mandatory data breach notification law comes into effect later this year.

But given how many of the app’s users are located in Europe, the company also faces action under the newly implemented EU’s General Data Protection Regulation. The law, known as GDPR, came into effect on May 25 and allows regulators to fine companies that violate the new law up to four percent of the firm’s global revenue for the previous year.

According to recent research, two-thirds of organizations were not prepared for the new EU law, just weeks before it was implemented.