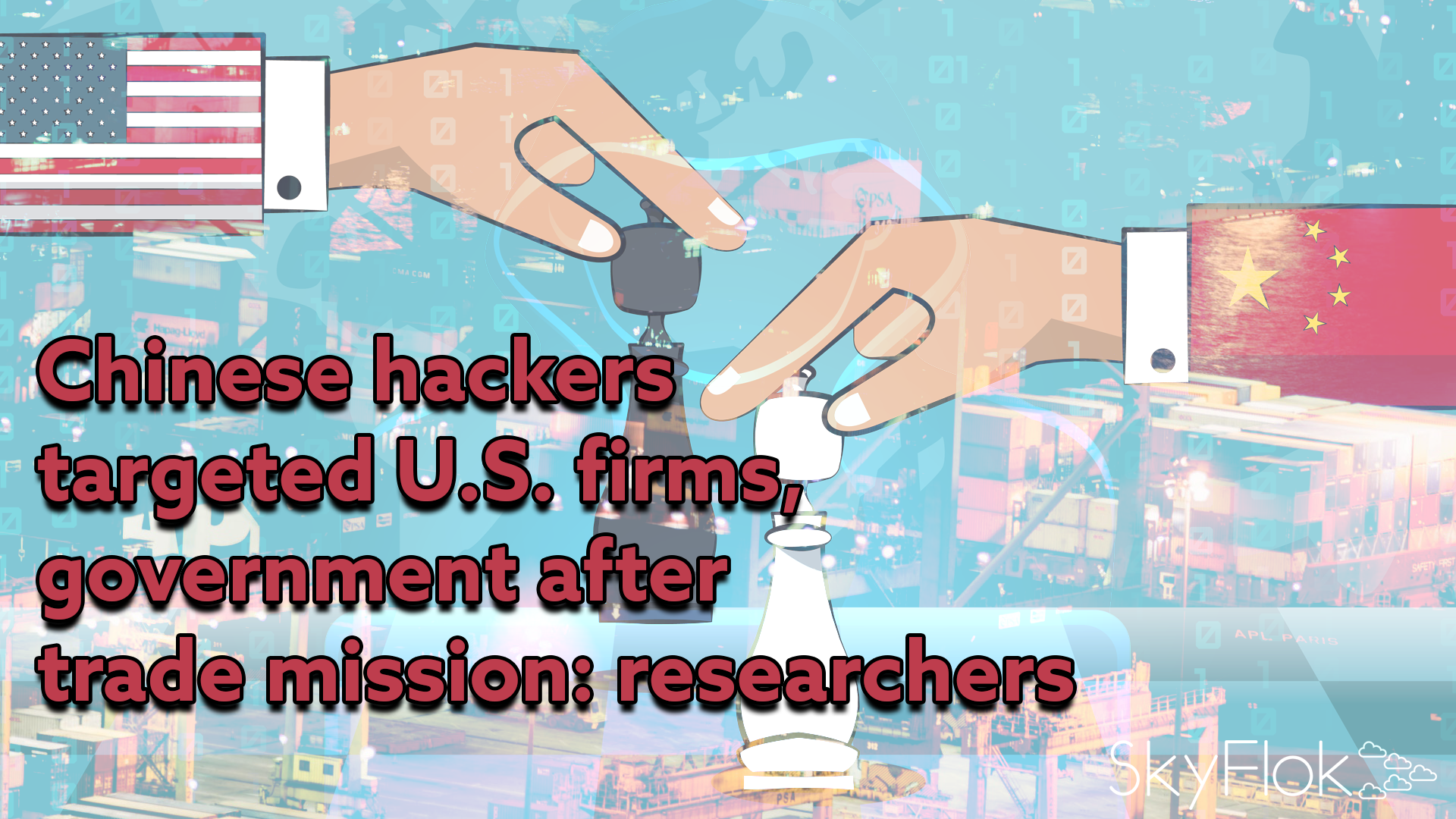 Enjoy secure storage for your data and make sure you keep the privacy of your and your clients’ data when sharing files with them by using SkyFlok.

SkyFlok is always backed up in case of an attack on your files. You can easily recover your files as SkyFlok keeps all previous versions of your files in the system and gives you easy access to them.

Cybersecurity firm Recorded Future said the group used computers at China’s Tsinghua University to target U.S. energy and communications companies, and the Alaskan state government, in the weeks before and after Alaska’s trade mission to China. Led by Governor Bill Walker, companies and economic development agencies spent a week in China in May.

Organizations involved in the trade mission were subject to focused attention from Chinese hackers, underscoring the tensions around an escalating tit-for-tat trade war between Washington and Beijing.

China was Alaska’s largest foreign trading partner in 2017 with over $1.32 billion in exports.

Recorded Future said in a report to be released later on Thursday that the websites of Alaskan internet service providers and government offices were closely inspected in May by university computers searching for security flaws, which can be used by hackers to break into normally locked and confidential systems.

The Alaskan government was again scanned for software vulnerabilities in June, just 24 hours after Walker said he would raise concerns in Washington about the economic damage caused by the U.S.-China trade dispute.

A Tsinghua University official, reached by telephone, said the allegations were false.

“This is baseless. I’ve never heard of this, so I have no way to give a response,” said the official, who declined to give his name.

Tsinghua University, known as “China’s MIT,” is closely connected to Tsinghua Holdings, a state-backed company focused on the development of various technologies, including artificial intelligence and robotics.

China’s Defense Ministry did not respond to a request for comment.

Recorded Future gave a copy of its report to law enforcement. The FBI declined to comment.

It is unclear whether the targeted systems were compromised, but the highly focused, extensive and peculiar scanning activity indicates a “serious interest” in hacking them, said Priscilla Moriuchi, director of strategic threat development at Recorded Future and former head of the National Security Agency’s East Asia and Pacific cyber threats office.

“The spike in scanning activity at the conclusion of trade discussions on related topics indicates that the activity was likely an attempt to gain insight into the Alaskan perspective on the trip and strategic advantage in the post-visit negotiations,” Recorded Future said in the report…

The latest in curated technology related news collected from many of the leading news distribution, industry research and technology vendor firms on the planet.

Here you will find recent news sources from companies such as Reuters, Marketwired, IDC, Gartner or directly from cloud vendors such as Google, Microsoft or Amazon.