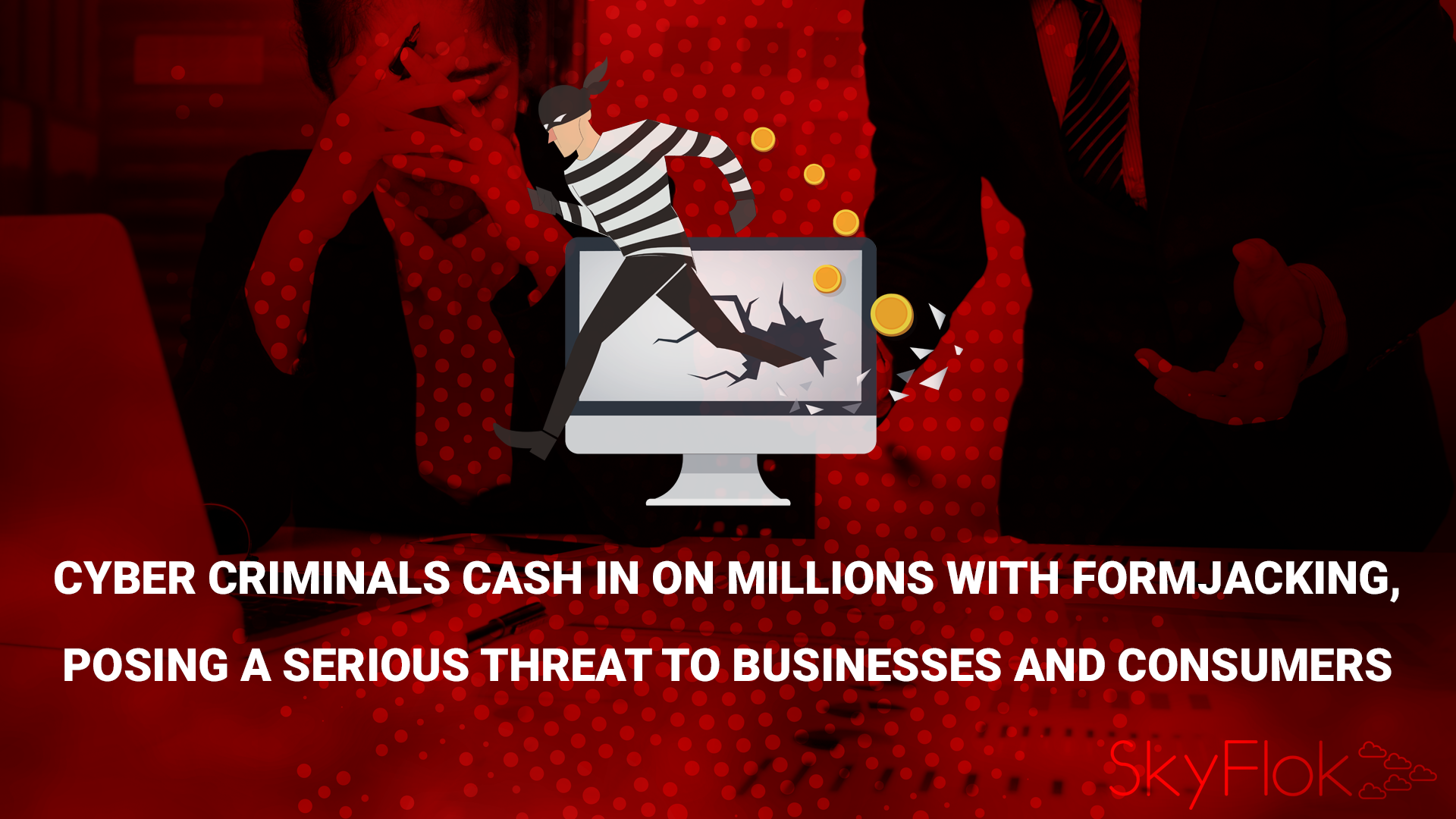 Faced with diminishing returns from ransomware and cryptojacking, cyber criminals are doubling down on alternative methods, such as formjacking, to make money according to Symantec’s Internet Security Threat Report

SkyFlok preserves the integrity of your data and keeps all past versions of your files for your records and also in case of an attack. You can recover easily and get instant access to your files. Join us!

Formjacking Is the New Get Rich Quick Scheme for Cyber Criminals

Formjacking attacks are simple – essentially virtual ATM skimming – where cyber criminals inject malicious code into retailers’ websites to steal shoppers’ payment card details. On average, more than 4,800 unique websites are compromised with formjacking code every month. Symantec blocked more than 3.7 million formjacking attacks on endpoints in 2018, with nearly a third of all detections occurring during the busiest online shopping period of the year – November and December.

While a number of well-known retailers’ online payment websites, including Ticketmaster and British Airways, were compromised with formjacking code in recent months, Symantec’s research reveals small and medium-size retailers are, by and large, the most widely compromised.

By conservative estimates, cyber criminals may have collected tens of millions of dollars last year, stealing consumers’ financial and personal information through credit card fraud and sales on the dark web. Just 10 credit cards stolen from each compromised website could result in a yield of up to $2.2M each month, with a single credit card fetching up to $45 in the underground selling forums. With more than 380,000 credit cards stolen, the British Airways attack alone may have allowed criminals to net more than $17 million.

“Formjacking represents a serious threat for both businesses and consumers,” said Greg Clark, CEO, Symantec. “Consumers have no way to know if they are visiting an infected online retailer without using a comprehensive security solution, leaving their valuable personal and financial information vulnerable to potentially devastating identity theft. For enterprises, the skyrocketing increase in formjacking reflects the growing risk of supply chain attacks, not to mention the reputational and liability risks businesses face when compromised.”

The Diminishing Returns of Cryptojacking and Ransomware

In recent years, ransomware and cryptojacking, where cyber criminals harness stolen processing power and cloud CPU usage from consumers and enterprises to mine cryptocurrency, were the go-to methods for cyber criminals looking to make easy money. However, 2018 brought drop-offs in activity and diminishing returns, primarily due to declining cryptocurrency values and increasing adoption of cloud and mobile computing, rendering attacks less effective. For the first time since 2013, ransomware infections declined, dropping by 20 percent. Nevertheless, enterprises should not let their guard down – enterprise ransomware infections jumped by 12 percent in 2018, bucking the overall downward trend and demonstrating ransomware’s ongoing threat to organizations. In fact, more than eight in ten ransomware infections impact organizations.

Although cryptojacking activity peaked early last year, cryptojacking activity declined by 52 percent throughout the course of 2018. Even with cryptocurrency values dropping by 90 percent and significantly reducing profitability, cryptojacking nonetheless continues to hold appeal with attackers due to the low barrier of entry, minimal overhead, and anonymity it offers. Symantec blocked 3.5 million cryptojacking events on endpoints in December 2018 alone.

When It Comes to Security, the Cloud Is the New PC

The same security mistakes that were made on PCs during their initial adoption by the enterprise are now happening in the cloud. A single misconfigured cloud workload or storage instance could cost a company millions of dollars or land it in a compliance nightmare. In the past year alone, more than 70 million records were stolen or leaked from poorly configured S3 buckets. There are also numerous, easily-accessible tools that allow attackers to identify misconfigured cloud resources on the internet.

The recent discoveries of hardware chip vulnerabilities, including Meltdown, Spectre, and Foreshadow also place cloud services at risk of being exploited to gain access to the protected memory spaces of other companies’ resources hosted on the same physical server.

Supply chain and living off the land (LotL) attacks are now a mainstay of the modern threat landscape, widely adopted by both cyber criminals and targeted attack groups. In fact, supply chain attacks ballooned by 78 percent in 2018.

LotL techniques allow attackers to maintain a low profile and hide their activity in a mass of legitimate processes. For example, the use of malicious PowerShell scripts increased by 1,000 percent last year. While Symantec blocks 115,000 malicious PowerShell scripts each month, this actually accounts for less than 1 percent of overall PowerShell usage. A sledgehammer approach toward blocking all PowerShell activity would be disruptive to organizations, further illustrating why LotL techniques have become the preferred tactic for many targeted attack groups.

Identifying and blocking these attacks requires the use of advanced detection methods like analytics and machine learning, such as Symantec’s Managed Endpoint Detection and Response (MEDR) service, its enhanced EDR 4.0 technology, as well as its advanced AI solution, Targeted Attack Analytics (TAA). TAA has allowed Symantec to uncover dozens of stealthy targeted attacks, including those from the Gallmaker group who conducted their cyber espionage campaigns completely without malware.

In addition to LotL and weaknesses in the software supply chain, attackers are also increasing their use of conventional attack methods, like spear-phishing, to infiltrate organizations. While intelligence gathering remains the primary motive of targeted attacks, the number of attack groups using malware designed to destroy and disrupt business operations increased by 25 percent in 2018.

While the volume of Internet of Things (IoT) attacks remains high and consistent with 2017 levels, the profile of IoT attacks is changing dramatically. Although routers and connected cameras make up the largest percentage of infected devices (90 percent), almost every IoT device has been proven vulnerable, with everything from smart light bulbs to voice assistants creating additional entry points for attackers.

Targeted attack groups are increasingly focusing on IoT as a key entry point. The emergence of the VPNFilter router malware represents an evolution in traditional IoT threats. Conceived by a skilled and well-resourced threat actor, it allows its creators to destroy or wipe a device, steal credentials and data, and intercept SCADA communications.

“With an increasing trend towards the convergence of IT and industrial IoT, the next cyber battlefield is operational technology,” said Kevin Haley, director, Symantec Security Response. “A growing number of groups, such as Thrip and Triton, display interest in compromising operational systems and industrial control systems to potentially prepare for cyber warfare.”

With the recent Cambridge Analytica data scandal and the Facebook data privacy hearings, the implementation of the General Data Privacy Regulation (GDPR), and revelations about app location tracking and privacy bugs in widely-used apps such as Apple’s FaceTime feature, consumer privacy has entered the spotlight the past year.

Smart phones could arguably be the greatest spying device ever created – a camera, a listening device and location tracker all in one that is willingly carried and used wherever its owner goes. While already targeted by nation-states for traditional spying, smart phones have also become a lucrative means by which to collect consumers’ personal information, with mobile app developers existing as the worst offenders.

Digital tools that gather cellphone data for tracking children, friends, or lost phones are also on the rise and clearing the way for abuse to track others without consent. More than 200 apps and services offer stalkers a variety of capabilities, including basic location tracking, text harvesting, and even secret video recording.