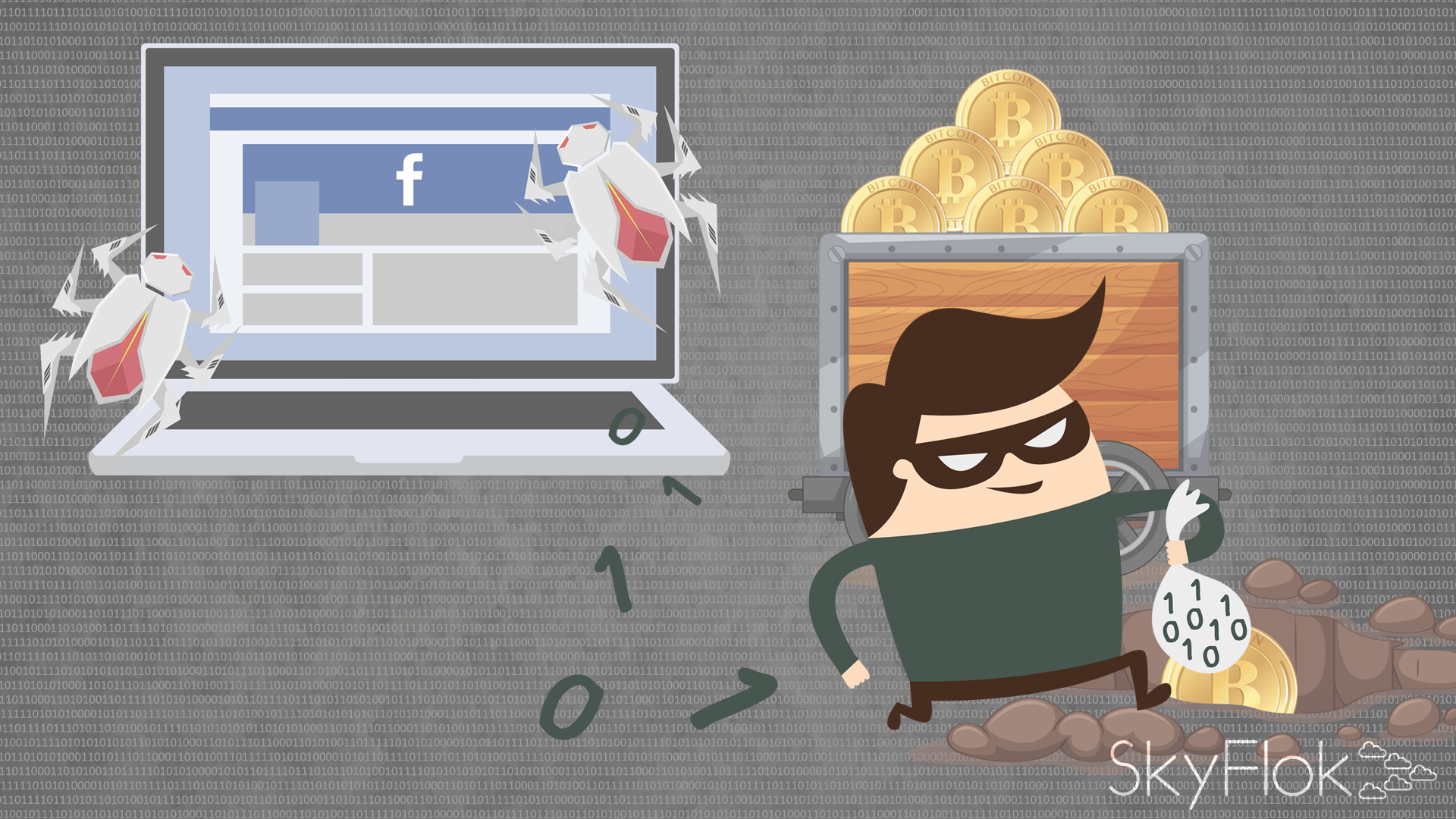 A new malware campaign has been uncovered on Facebook which not only steals account credentials but also installs scripts for covert cryptocurrency mining. Nigelthorn was discovered in May this year and has infected over 100,000 Facebook users in over 100 countries to date.

Cyber attacks are getting more costly and can easily put your business at risk. Many companies are struggling to fend off cyber attacks as hackers get faster, sneakier and more creative.

At SkyFlok we do not compromise the privacy and security of your files or your customer’s data. We use innovative cloud storage technology to spread your data across multiple providers and locations to make sure it remains encrypted and private, even if individual providers might be compromised. No single provider has enough information to compromise your privacy.

SkyFlok also provides you with a backup plan in case of file corruption, internal or external attacks on your data.

Subscribe today and take the right path to protect your and your clients data with SkyFlok.

Cybersecurity firm Radware said in a blog post on Thursday that Nigelthorn is a new campaign which focuses on the Facebook social network.

The malware is so called due to the abuse of a legitimate Google Chrome extension called “Nigelify,” which replaces images displayed on a web page with pictures of Nigel Thornberry, a cartoon character from the television show The Wild Thornberrys.

According to Radware researchers, the Nigelthorn campaign is propagating across the social network through social engineering and private messages and aims to dupe users into downloading malware for the purpose of account hijacking, cryptojacking, and click fraud.

Potential victims will see a message from a connection in their network which tags them in a post or will receive private messages which alternatively contain a malicious link or picture.

If a victim clicks through, the malicious link redirects victims to a fake YouTube page which requests that users install a Google Chrome extension in order to play video content.

Once a user accepts the “Add Extension” request, a malicious extension is installed and the victim’s system is added to a botnet.

These malicious extensions also redirect the victim to Facebook in order to generate a session token and hijack their online session in order to slurp up their Facebook account credentials and send them to command-and-control (C&C) server.

This access also permits the malware to send messages in their stead and propagate further.

Once the malicious extension is installed on the Google Chrome browser, malicious JavaScript comes into play. The script is downloaded from the C&C server and further installs a cryptomining tool.

This tool forces the victim’s machine to covertly mine for cryptocurrencies, of which the proceeds are sent to mining pools controlled by the attacker.

Radware says that in the last few days, Monero, Bytecoin, and Electroneum are the mining targets and the attackers have made roughly $1,000.

Nigelthorn employs a number of techniques in order to retain persistency on the victim’s machine. If a victim tries to open the extensions tab, the malware automatically closes it. The malware also blocks users from downloading Facebook and Chrome cleaner tools, deleting Facebook posts, and making comments.

While malicious copies of Nigelify are responsible for the majority of infections, the researchers have also discovered other legitimate extensions which have been abused including PwnerLike and iHabno.

Four other extensions were detected by Google’s security systems and were removed in less than 24 hours.

The majority of infections have taken place in the Philippines, Venezuela, and Ecuador.

“The malware depends on Chrome and runs on both Windows and Linux,” the researchers say. “It is important to emphasize that the campaign focuses on Chrome browsers and Radware believes that users that do not use Chrome are not at risk.”

A Google spokesperson told Threatpost that “we removed the malicious extensions from Chrome Web Store and the browsers of the small percentage of affected users within hours of being alerted.”