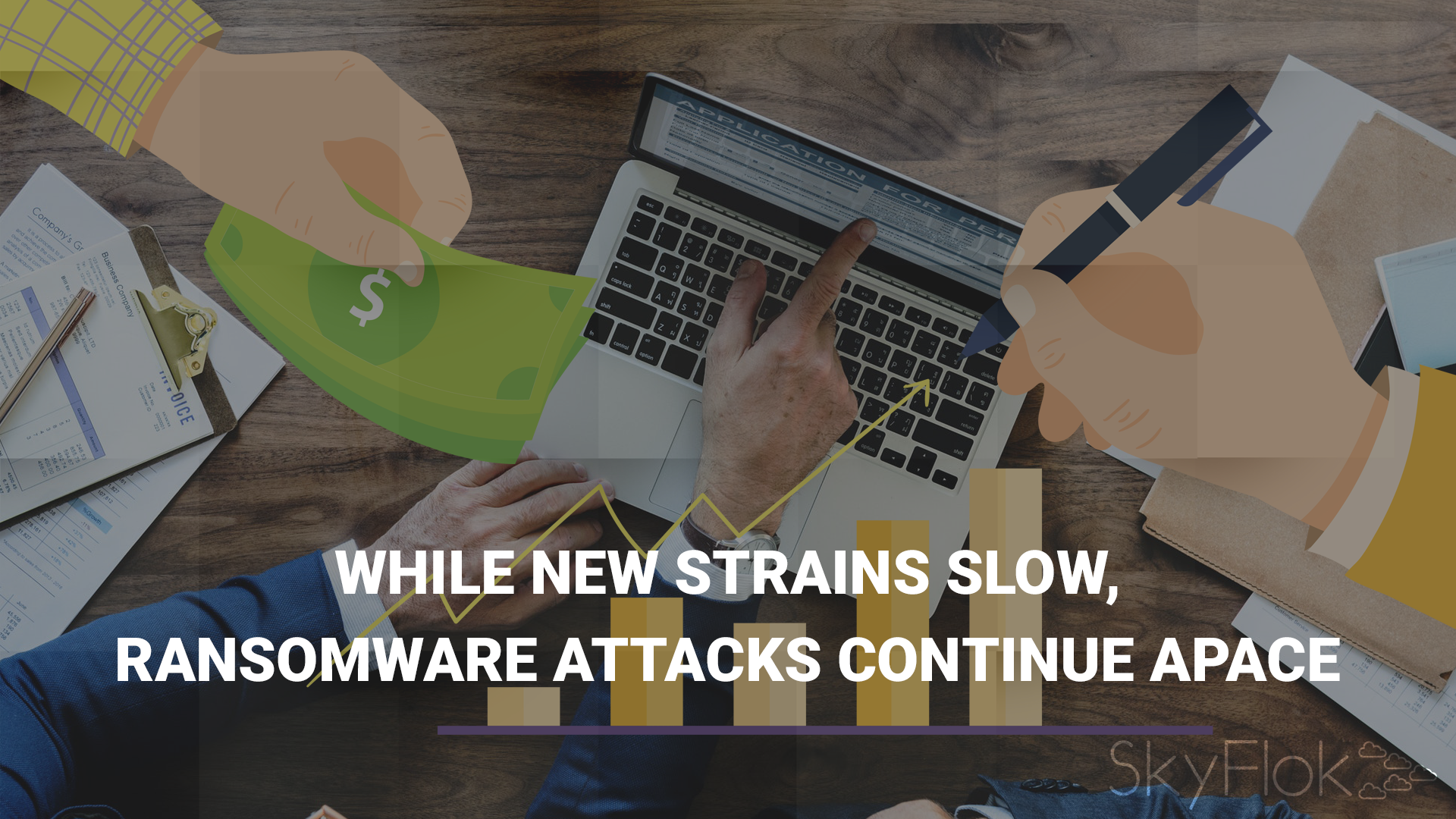 Worried about ransomware? SkyFlok is always backed up to remove your risk.

If a ransomware attack encrypts your computer’s data, you can still recover all versions of your files prior to that attack as they are securely stored in the Cloud.

September 25, 2018 – While the emergence of new ransomware strains has slowed, the total number of ransomware samples continues to grow, fueling continued ransomware attacks, according to the latest data from McAfee Labs.

A year after the outbreaks of the WannaCry and NotPetya ransomware attacks, new malware samples designed to exploit software vulnerabilities increased by 151 percent in the second quarter. McAfee saw the exploits from these two high-profile threats repurposed within new malware strains, and newly discovered vulnerability exploits similarly adapted to produce new threats.

“WannaCry and NotPetya provided cybercriminals compelling examples of how malware could use vulnerability exploits to gain a foothold on systems and then quickly propagate across networks,” said McAfee Advanced Threat Research Lead Scientist and Senior Principal Engineer Christiaan Beek.

“It’s still surprising to see numerous vulnerabilities from as far back as 2014 used successfully to spearhead attacks, even when there have been patches available for months and years to deflect exploits. This is a discouraging testament to the fact that users and organizations still must do a better job of patching vulnerabilities when fixes become available,” added Beek.

While ransomware samples have been increasing steadily, cryptomining malware has surged recently. New cryptomining malware samples grew an incredible 629 percent to more than 2.9 million samples in the first quarter of 2018. This trend continued in the second quarter as total samples grew by 86 percent with more than 2.5 million new samples. McAfee Labs has identified what appeared to be older malware such as ransomware retooled with cryptomining capabilities.

“A few years ago, we wouldn’t think of internet routers, video-recording devices, and other Internet of Things devices as platforms for cryptomining because their CPU speeds were too insufficient to support such productivity,” said Beek. “Today, the tremendous volume of such devices online and their propensity for weak passwords present a very attractive platform for this activity. If I were a cybercriminal who owns a botnet of 100,000 such IoT devices, it would cost me next to nothing financially to produce enough cryptocurrency to create a new, profitable revenue stream.”

Mobile Malware on the Rise

While Microsoft’s task automation and configuration management framework PowerShell has been active among fileless malware developers in recent previous quarters, new samples slowed to 15 percent growth. But new LNK malware continues to grow, as cybercriminals are increasingly using .lnk shortcuts to surreptitiously deliver malicious PowerShell scripts and other malware, warned McAfee. Total samples in the category have increased 489 percent over the past four quarters.

McAfee Labs and McAfee Advanced Threat Research team discovered a vulnerability in the Cortana voice assistant in Microsoft Windows 10. The flaw, for which Microsoft released a patch in June, could have allowed attackers to execute code from the locked screen of a fully patched Windows 10 machine. McAfee addressed three vectors of research that have been combined by Microsoft and together represent CVE-2018-8140. McAfee submitted the vulnerability to Microsoft in April as part of McAfee’s responsible disclosure policy.