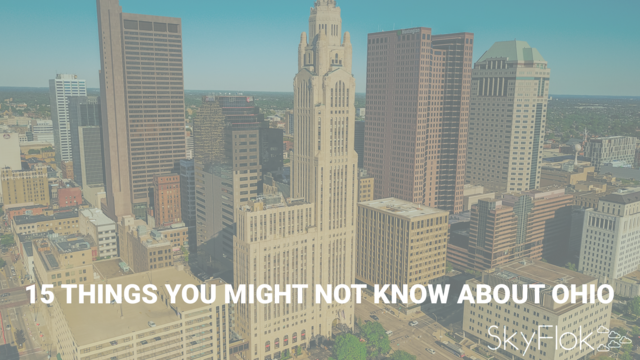 Did you know that the name Ohio originates from the Iroquois word for “good river”?

In today’s article, you can find 15 interesting facts about Ohio – another secure location available to our customers.

1. Ohio gets its name from the Iroquois word ohi-yo, meaning “great river.”

2. Ohio didn’t officially become a state until 1953. It was declared a state in 1803, but didn’t get the presidential stamp of approval until President Dwight Eisenhower signed off. He back-dated the declaration to the original date.

3. Ohio is known as the Buckeye State because of the buckeye trees commonly found throughout the Ohio River Valley. The plants produce small brown nuts that look like the eye of a deer; it is said that carrying one in your pocket is good luck.

4. Ohio native James Ritty invented the cash register in 1878. As a saloon owner, Ritty had a problem with his employees stealing his money. He got the idea of a machine that kept track of the money transactions while looking at machinery on a steamboat to Europe.

5. Speaking of inventors, Thomas Edison was born in Milan, Ohio.

6. The Shawshank Redemption was shot at the Ohio State Reformatory in Mansfield. It was later used for Air Force One and you can take tours of the facility.

7. Before the Boston Red Sox, there were the Cincinnati Red Stockings. Founded in 1869, they were the first professional baseball team.

8. Before going into television, Jerry Springer was the 56th mayor of Cincinnati. He considered running for Senate, but was concerned that his show’s negative reputation would affect his chances.

9. Ohio is home to the “One and Only Presidential Museum.” The museum honors John Hanson, who was technically the first president of the United States; he and eight others were elected and served one year terms before the Constitution was written. Nick Pahys, Jr. DDG-CH-AdVS-A.G.E.-LDA-FIBA (yes, he really does have that many initials!) does not like the fact that textbooks glossed over this important historical figure, so he erected the museum to properly educate the masses. Visitors can enjoy artifacts, portraits, and even a personal tour from the owner himself.

10. The state houses the world’s largest cuckoo clock. The giant, fully functional structure is appropriately located in Sugarcreek, the “Little Switzerland of Ohio.”

11. The Cuyahoga River has caught on fire at least 13 times; it’s aptly nicknamed “The River That Caught Fire.” The river was one of the most polluted rivers in the country and would catch fire after sparks from the train would fall into the water. After a highly media-covered fire in 1969, Congress was inspired to clean up pollution across the country and established theEnvironmental Protection Agency (EPA).

12. Ohio’s state rock song is “Hang on, Sloopy” by the McCoys. It was originally the unofficial Ohio State marching band anthem, so the choice made sense.

14. Agriculture is Ohio’s largest industry: it contributes over $93 billion to the economy annually. The state ranks number one in Swiss cheese production.

15. Despite arguments with North Carolina, Ohio is officially the birthplace of aviation. The state is home to the airplane’s inventors Wilbur and Orville Wright, as well as 24 astronauts, and Neil Armstrong, the first man to walk on the moon, was from Wapakoneta, Ohio.