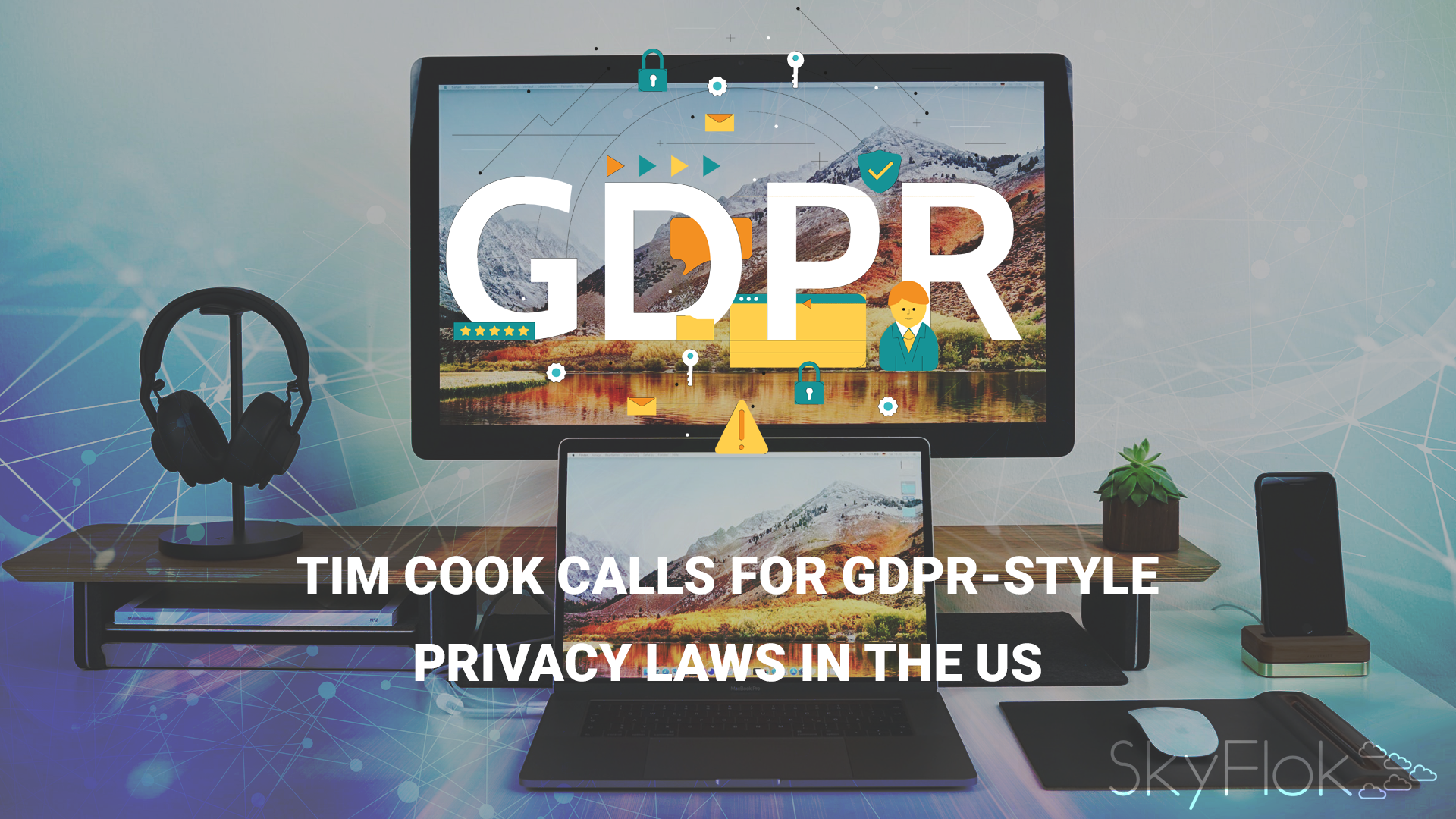 Apple CEO and data privacy advocate Tim Cook has made an impassioned speech calling for new digital privacy laws in the US. He believes personal data is being ‘weaponized.’

Data privacy and having control of your and your customer’s data becomes even more crucial in today’s digital world.

SkyFlok believes that privacy comes first and has a solution that puts you in the driver seat to control where in the world your data is stored and protecting its privacy at all times. SkyFlok intelligently spreads your files over multiple providers of your choice, and prevents any single Cloud provider from disclosing your data. Choose from any of our GDPR compliant locations in Europe, Canada, and the USA and, in the near future, with GDPR-compliant locations all around the globe.

Apple CEO and long-time data privacy advocate Tim Cook has made an impassioned speech calling for new digital privacy laws in the US. At a privacy conference in Brussels, Cook said that modern technology has resulted in a “data-industrial complex” where personal information is “weaponized against us with military efficiency,” and in a way that doesn’t just affect individuals but whole sections of society.

“Platforms and algorithms that promised to improve our lives can actually magnify our worst human tendencies,” said Cook. “Rogue actors and even governments have taken advantage of user trust to deepen divisions, incite violence, and even undermine our shared sense of what is true and what is false. This crisis is real. It is not imagined, or exaggerated, or crazy.”

While Cook didn’t specify the catalysts behind this crisis, it’s clear he was nodding towards recent events such as the Cambridge Analytica Scandal, and ongoing concerns regarding political ad targeting. He didn’t mention any companies by name, but he did, of course, reiterate Apple’s commitment to privacy.

Cook praised Europe’s “successful implementation” of privacy law GDPR, and said that “It is time for the rest of the world … to follow your lead. We at Apple are in full support of a comprehensive federal privacy law in the United States.” He outlined four key areas that he believes should be turned into legislation: the right to have personal data minimized; the right for users to know what data is collected on them; the right to access that data; and the right for that data to be kept securely.

Cook has been outspoken about privacy rights before, and has repeatedly called for tougher regulations in the past — something which has jarred with critics claiming such regulations would be an obstacle for innovation. However, he pre-empted this take during his Brussels speech. “This notion isn’t just wrong, it’s destructive,” he said. “Technology’s potential is and always must be rooted in the faith people have in it.” He then followed up his speech with a tweet that asked, “It all boils down to a fundamental question: What kind of world do we want to live in?”

It was an honor to be invited to #ICDPPC2018 in Brussels this morning. I’d like to share a bit of what I said to this gathering of privacy regulators from around the world. It all boils down to a fundamental question: What kind of world do we want to live in?